Plant a tree in memory of Marguerite

Marguerite Hale Coppock (nee: Schenck), age 95, passed away November 16, 2019 at Providence Seward Mountain Haven. Marguerite was born December 15, 1923 in International Falls, Minnesota to John Wesley and Olga Thompson Schenck(Jahr). She grew up in Deer River, Minnesota. She honorably served in the US Navy-Nurse's Corp during World War II stationed at Hunter College in New York City, New York. Marguerite moved to Seward in 1987 and fell in love with Alaska. She was a member of St Peter's Episcopal Church in Seward.

To plant a tree in memory of Marguerite Coppock, please visit our Tribute Store. 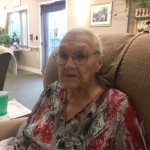