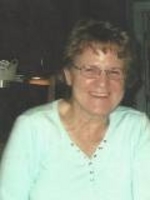 Plant a tree in memory of Lorraine

Lorraine Britt, known as Sue to most, age 64, passed into God's hands on May 26, 2013 at home with her family surrounding her. Born in 1949 in Seattle, she grew up in Chitina/ Lower Tonsina. She married James L. Britt in 1968, lived five years in Ernestine, and then raised their five children in Valdez before moving to Wasilla in 2001. Sue previously worked as a home child care provider, a lead cashier at Eagle Quality in Valdez, then a paraprofessional at Valdez Public Schools and a substitute at Mat-Su Public Schools, finally retiring in 2012 from GCI after 8 years as a telephone operator. Sue enjoyed being active outdoors as much as possible, from riding snow machines to playing softball to gardening. She was also accomplished at knitting, crocheting, and sewing. However her favorite thing to do was spend time with her children and grandchildren. Sue is survived by her husband James Britt; her children Michael (Valerie) Britt of Rochester, MN, Daniel (Sherry) Britt of Wasilla, AK, Michele Kelly (Mike Morris) of Wasilla, AK, Matthew (Heather) Britt of Palmer, AK, Dawn Britt (Joe Seymore) of Wasilla, AK; her grandchildren, Avia Smith Britt, Anna Kelly, Jareth Britt, Sydny Kelly, Connor Britt, Faith Britt, Perrin Britt, Elijah Britt, Lexi Seymore, Logan Seymore, Aidan LaSelle, Adalyn Britt, Kaydence Seymore, Jonathan Britt, Keegan Britt, one great granddaughter, Halie VanHout, as well as three brothers, Howard Haley, Jonathan Nagengast, and Butch Nagengast. She is preceded in death by her mother Barbara Nagengast and brother Phillip Nagengast. According to Sue's wishes there will not be a formal service; instead the family will gather for a private, outdoor celebration of life. In lieu of flowers, the family asks memorial contributions be made to American Cancer Society; 3851 Piper St. Ste. U240, Anchorage, AK, 99508. Arrangements were entrusted to Cremation Society of Alaska. Words of comfort may be shared with the family at alaskacremation.com.

To plant a tree in memory of Lorraine Britt, please visit our Tribute Store.