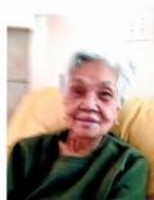 Plant a tree in memory of Laureana

Anchorage resident, Laureana Apu' Catacutan de Guzman, 88, died Tuesday afternoon, July 30, 2013, from pneumonia and a collapsed lung at Alaska Regional Medical Center in Anchorage, Alaska. Her daughters were at her bedside at the hospital when she passed peacefully.

A funeral mass and celebration of life will be held at Saint Patrick's Parish in Anchorage on August 15, 2013 at 1:00 p.m. where she attended Sunday Mass regularly for many years. She was cremated on August 2, 2013 and her remains will be taken to the Philippines and buried next to her husband.

Mrs. de Guzman was born on March 25, 1925 in Guadalupe, Philippines to Marcelo and Isabel (Laxamana) Catacutan. She married Daniel de Guzman in 1943 and resided in Angeles City, Philippines until moving to the US in 1979. They moved to Anchorage in 1980 from Las Vegas, Nevada. She lived in Anchorage for 33 years and enjoyed her life in Alaska.

Her family wrote: "Apu was an old soul whose greatest concerns were for her family and their well being. She loved to care for her family and was generous to everyone around her. Apu will be missed dearly and her warm heart will leave a void in our hearts that will be impossible to replace."

Mrs. De Guzman was preceded in death by her husband Daniel and a son Rolando.

Funeral arrangements entrusted to the Cremation Society of Alaska; words of comfort may be left for the family at www.alaskacremation.com.

To plant a tree in memory of Laureana Guzman, please visit our Tribute Store.