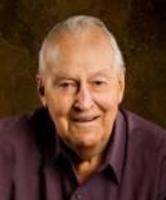 Plant a tree in memory of James

A Funeral Mass will be held 3 p.m., Friday, June 13, at St Benedict's Parish, 8110 Jewel Lake Road, Anchorage. A visitation will precede the Mass from 2:30 to 3 p.m. Father Leo Walsh, S.T.D. will officiate. His cremated remains will be interred in Parker, Colorado.

Steve was born September 27, 1927, in Moose Jaw, Saskatchewan to John Joseph and Pauline (Baron) McDonald. He married Bernice "Bernie" Gibson on April 16, 1955, in Vancouver, Canada. Steve worked in construction with the Teamsters Local 213 prior to coming to Alaska in 1960. Moving to Anchorage, he was employed as a Teamster with Alaska Freight Lines and Sealand Services. He was a member of the United Brotherhood of Teamsters Local 959 and St Benedict's Parish.

Steve received a beautification certificate for an improved garden from the Spenard Community Council, and a longevity award from Local 959. He enjoyed gardening, travel and watching baseball, especially the Washington Nationals and the Colorado Rockies. He also enjoyed reading mystery novels especially James Patterson and David Baldacci. Another pastime was completing crossword puzzles, the harder the better. He enjoyed seeing Singapore, Hong Kong, Indonesia as well as England. His favorite travels were to Indian Harbor Beach, Florida where he went every year to see his baseball friends during major league baseball spring training.

His family wrote: "He enjoyed his baseball trips with his daughter every year and his trips to Montreal to see his brother's baseball team, the Montreal Expos. He was a very kind, loving husband and father. He enjoyed his job and the people he worked with and those he met during his work years. He had a marvelous sense of humor and mischievous zest."

Steve is survived by his wife, Bernice "Bernie" McDonald of Anchorage; his daughter and son-in-law, Kimberley and Jack Strong of Anchorage, and niece, Linda of Montreal, Canada.

To plant a tree in memory of James McDonald, please visit our Tribute Store.