Plant a tree in memory of Bernard

Bernard was born in Portland, Oregon on June 24, 1926 to August and Elise (Von Scheele) Wanser. Bernard moved to Alaska spending his childhood in the native village of Afognak above Kodiak Island. He spent his formative years to adulthood in South Naknek in Bristol Bay. There he learned to trap, hunt, raised sled dogs teams and to commercial fish for salmon by set-netting and drift gillnetting. He continued to work in the fishing industry for salmon and herring in Bristol Bay to crabbing in the Bering Sea until he retired in 1990. Bernard traveled to the Philippines where he met and married his wife, Marisa Torino on October 25, 1992.

Barney was a skipper for commercial fishing by trade but loved hunting in his free time. He also enjoyed flying small aircrafts and staying at home watching TV. The family stated that "Barney will be dearly missed."

Bernard is survived by his wife, Marisa; their three daughters, Terrilyn Wamser, Marcia Anderson and Susan Wamser all of Anchorage; grandchildren, Danielle, Janelle, Lyndsey, Kyle, Edwin, Dorrie, Cristy, Kassandra and Charles; great grandchildren, Rena and Jacob. He is preceded in death by his parents; brother, Dick and son, Charlie Wamser.

Arrangements were entrusted to the Cremation Society of Alaska. Words of comfort may be left for the family at www.alaskacremation.com.

To plant a tree in memory of Bernard Wamser, please visit our Tribute Store. 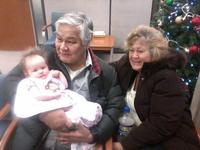